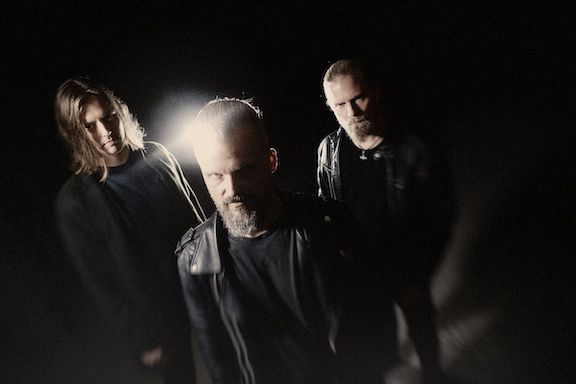 Hard rock band WHITE VOID’s debut record “Anti” (also on Nuclear Blast) was one of last year’s most colorful and surprising releases, hailed by a collective metal press as an absolute whirlwind of occult rock and melodic new wave. But vocalist and band frontman Lars Are Nedland – also a long-time member of BORKNAGAR and SOLEFALD – clearly needed a contrast to all the color and flamboyance, and thus BLACK VOID forced itself into being. Not a band for waiting, the debut album "Antithesis" was recorded almost immediately and is set to be released through Nuclear Blast on May 27th - as a grimy contrast to WHITE VOID’s colorful and melodic outlet.
"Antithesis," then, is nihilistic aggression and desperation. Furious and unrepentant in attitude, it builds on the philosophical works of Friedrich Nietzsche while leaning on punk rock and black metal. Nihilistic, filthy, violent and raw.
BLACK VOID are unleashing their second single "Dadaist Disgust" onto the world, that features black metal legend Sakis Tolis (ROTTING CHRIST). The single comes with a mesmerizing animated music video, that you can watch here:

Lars Are Nedland comments: "Dadaism is in its core a rejection of logic and tradition. An art movement built on negation with an undercurrent of nihilism. BLACK VOID embraces the subversion of social and moral authorities, and much as the Dadaists we meet aggression with aggression – the absurd with the absurd.
'Dadaist Disgust,' then, is BLACK VOID’s way of connecting art and philosophy. Our take on two expressions that turn conventional thinking on its head - all set in a suitable framework of black metal inspired punk.
Add to that an amazing voice from the birthplace of philosophy in guest vocalist Sakis Tolis of Greek Black Metal Godfathers ROTTING CHRIST, and you have a song laden with morality-shattering anti-art and a black metal pedigree.
The video was beautifully created by visual virtuosi Joakim Storsve and Daniel Øverland, and contains fragments of both Nietzschean imagery and Dadaist references.
As Tolis snarls on the song’s chorus: Anti-art is the true art, Dada broke your conventions"
Sakis Tolis comments: "It is an honour for me to be a part of Lars Nedland's BLACK VOID project and it’s a privilege to work with one of the best Metal Voices around and a humble and honest Metal Warrior as well. 'Dadaist Disgust' kicks some serious ass, my brothers and sisters. Give it a listen and blow up your speakers. Horns Up!"
Pre-order "Antithesis" in the format of your choice here: https://bfan.link/BVantithesis