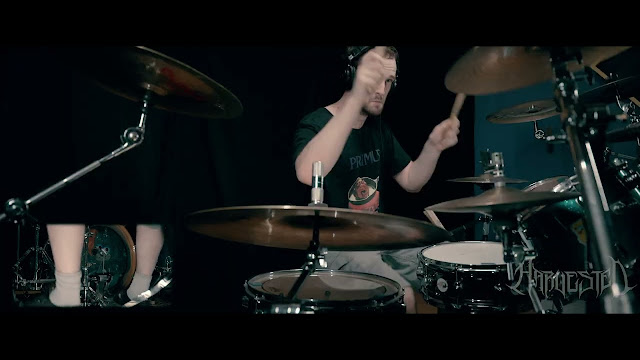 Harvested have a heavy death metal debut EP coming out and to showcase the thunder that drives them, they are releasing a drum playthrough video of the single “Bereavement”.
Watch the drum play through video here:
The track involves themes of extreme depression and suicidal tendencies, pummeled into you with triplets, blast beats, and chromatic runs, which lead up to an enigmatic solo and razor-sharp tremolo picking that end with slamming chugs. The band shares their thoughts on the song:
“It is one of our strongest songs. It's heavy and filled with dark lyrics that really fit the vibe of the song. It's the last song we wrote to finish off the 5 track release and it's our most mature song. It also more closely resembles our newer unreleased songs. We chose bereavement as one of our drum play through videos for it highlights different aspects of Jacob’s skills. Filled with blast beats and double bass, it's got everything an extreme metal drummer would want.”
Harvested bring lots of energy and pay homage to the classics, which they make clear in their videos. They rely on their performance and delivery rather than on cutting-edge technology. They don’t perform digitally or with backing tracks/IEM, just lots of windmilling and the aggression delivered by their frontman that will surely frighten the audience.
https://www.facebook.com/harvested666