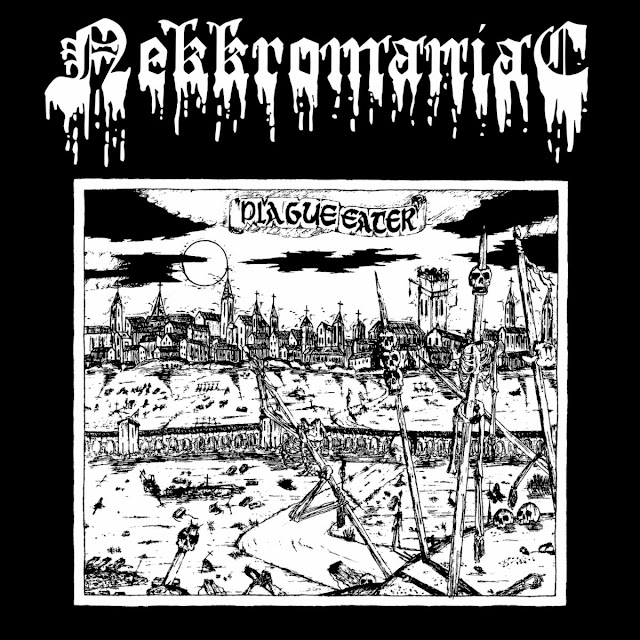 Gates Of Hell Records have released a remastered track, "Sacrifice," from the forthcoming NEKKROMANIAC vinyl LP reissue of Plague Eater. Gates of Hell Records is proud to announce the signing of German blackened thrashers NEKKROMANIAC for the vinyl release of their 2021 Plague Eater full-length album. The LP will be released on May 27.
Listen to the track 'Sacrifice' below:
Comments Ægror: “Plague Eater is the force that lingers in the abyss and pulls you down into the endless dark before you know it. Destined to eternal suffering. NEKKROMANIAC is DEATH. METAL.”
NEKKROMANIAC’s creation dates back to 2008 when vocalist Akheron and guitarist Ægror launched PEREMPTOR, a thrash band that recorded a three-song demo. However, the group disbanded after lineup changes and differences regarding musical direction. The two men quickly teamed up friends Impiöus (bass) and Beheader (drums) in DIOXIN, which was then rebranded as NEKKROMANIAC to reflect a darker and more devastating sound. The band released the Nekkrofukk EP in 2015 and launched the Hell’s Crusade festival held in Pirmasens, Germany, establishing NEKKROMANIAC as a leading force in cult, underground Teutonic thrash.
Plague Eater eventually caught the eye of Gates Of Hell Records. The parties cemented the deal shortly after that.
http://nekkromaniac.bandcamp.com
https://www.facebook.com/Nekkromaniac