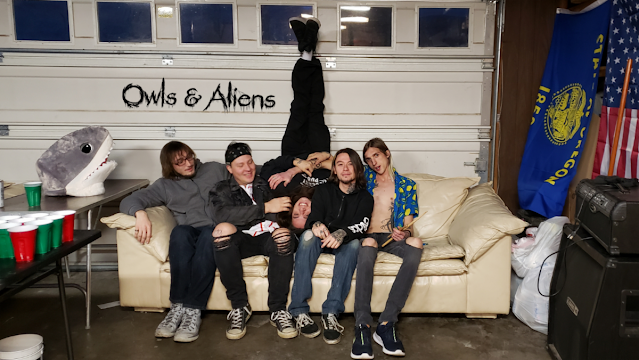 Owls & Aliens Release Their Single "These Vices" with MVK Music Group. "These Vices" is their last single release from their forthcoming album due out this summer!
Watch / listen "These Vices" here below:
Owls & Aliens bring the hot sauce to rock ‘n roll, taking inspiration from the genre’s most quintessential styles. When the music of Owls & Aliens hits listeners' earholes, layers of classic rock, heavy metal, punk rock, alternative rock, metalcore, and everything in between come crashing together, creating a beautiful amalgamation of sounds. The brotherhood formed between the five members is caused by each of their unfettered need to play, write and listen to music - despite coming from quite different musical backgrounds.
Owls & Aliens are currently competing in a huge Twitch competition put on by the Space Zebra Show called The Battle For The Big Stage, and the winners not only get to play the main stage at this year's Welcome To Rockville Festival in Daytona Beach, FL, the winners also get to go on tour with Escape the Fate and The Red Jumpsuit Apparatus! Voting is completely free, all you have to do is create or log in to your Twitch account, follow DWPresents, and watch the live streams on Thursdays and Sundays at 3:30PM PST.
Twitch channel: https://www.twitch.tv/dwpresents