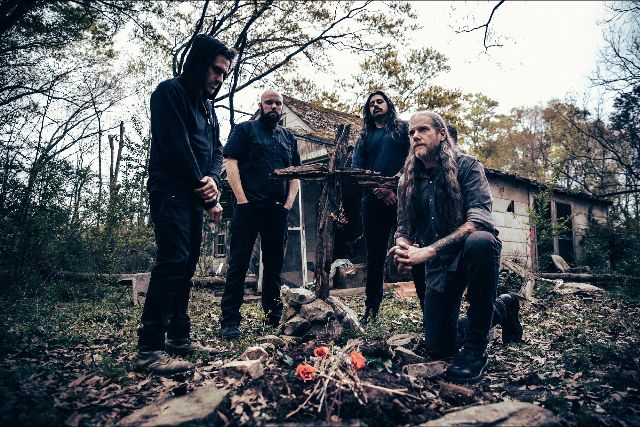 Drummer Beau Brandon of tortured blackened death metal outfit WITHERED is now releasing a brand new drum play-through for the song "Casting in Wait." The track is taken from the band's latest album ‘Verloren,’ which was released on June 25, 2021.
Watch the video below:
From its inception, WITHERED has been an outlier, a perplexing charge of extremity which the metal scene has never been able to put its finger on.
“We want to compound new elements into every album,” posits guitarist/vocalist Mike Thompson, “and we’re definitely a band for metal nerds. Our audience seems to be the old-schoolers who are absorbed by this stuff every day and jaded folks of a certain age. Industry types and peers tend to get it, but that’s about it.”
Originally formed by Thompson and ex-guitarist/vocalist Chris Freeman in 2003 following a spell in local grind institution Social Infestation (alongside Mastodon’s Troy Sanders), WITHERED’s initial goal was to re-write black, doom and death metal modes and mores. To that end, the band has achieved that goal as their sound and aesthetic refuses to clearly state which subgenre they call home. Over the course of its history, WITHERED has generated more questions than answers about who they are and what they do. They’ve toured with the varied likes of Mastodon, High on Fire, Dismember, Grave, Vital Remains, Possessed, Watain, Mayhem, 1349, Krallice, Skeletonwitch and Danzig. Their live show provides an air of never-know-what-you’re-gonna-get mystery. See them on one occasion and it’s a DIY kick in the gut with stripped down, rehearsal room bareness appropriately complementing the lunacy. The next time they get in the van they’ll do so accompanied by rigged up columns of light cloaking the stage in bloody reds and searing whites. And with Verloren, the band’s forthcoming fifth album, Thompson and his band mates – drummer Beau Brandon, bassist Rafay Nabeel and fellow guitarist/vocalist Dan Caycedo – continue to nudge both thematic and sonic goalposts by providing relatable food for thought while retaining the adversarial fire that has powered the engine since the start.
Line-up
Beau Brandon – Drums
Dan Caycedo – Vocals, Guitars
Rafay Nabeel – Bass Guitar
Mike Thompson – Vocals, Guitar
https://withered.bandcamp.com/merch