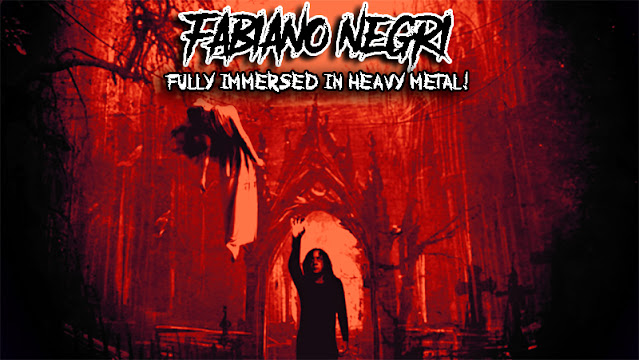 This past Friday the 13th was considered synonymous with bad luck - or even a curse. But not if we bring together some Heavy Metal. After all, it was on Friday, February 13, 1970, that the British and the world met the iconic eponymous Black Sabbath’s debut album, an album which is considered to be the beginning of Heavy Metal. And also on a Friday 13th, but this time in May 2022, the Brazilian great singer, songwriter and multi-instrumentalist Fabiano Negri released "ZebathY", his newest solo album on all streaming platforms and physical format.
Watch the lyric video for 'The Night Stairway', below:
And there is a deep relationship between this new album and Ozzy Osbourne, Tony Iommi, Geezer Butler and Bill Ward’s debut one. Besides Black Sabbath being Fabiano Negri’s favorite band, this is his first solo incursion in fully Heavy Metal sound. "The initial idea was to make an album that would bring the early days of metal sound", commented Fabiano. More than that, the musician took the opportunity to create a concept album dealing with the veiled prejudice that he identifies against women in the environment of Rock and, obviously, of Heavy Metal, specially on social media. "From the simple ‘I don’t like bands with female vocalists', to the outrage, a combination of sexism, chauvinism and misogyny", he said. Thus, the story revolves around a woman who had her life destroyed because of prejudice, who gives herself over to addictions and suffers from depression. However, everything takes a turn when an entity offers her a revenge deal against those who have caused her so much harm. The outcome? Just listen to the new album while following the lyrics to know!
A story as dense as this one, which at some moments gets closer to horror, deserves a heavy soundtrack to match. So, weight predominates throughout the 8 killer tracks of "ZebathY". Fabiano's well-tuned guitar (who also recorded vocals and drums; Ric Parma took over the bass) is the thread of this project, by the side of creative drum arrangements, which makes the album have the mood its theme demands.
"ZebathY" was recorded at Sonic Paw Studio (Sao Paulo) with joint production between Fabiano Negri and Ric Parma, and featured the more than special guest of Ian Pinheiro, Fabiano's son, who recorded drums on the track "Bloody Dawn" and made the backing vocals on "Princess' Stoned Sleep". Cover art and booklet are signed by Wagner Galesco.
Check out multiple packs to get this album in Fabiano’s site at:
www.fabianonegri.com/loja-1