Chilean Metal Band - DelTerror have recently released their first EP with 5 new powerful songs, all available on Spotify! By unleashing their new album they aim to expand their musical career nationally as well internationally.

To celebrate their EP debut, the Santiago band that was founded in 2020, has recently released the video of its first single “perros callejeros”. The audiovisual work was directed by Estudio Subterráneo and was recorded at Fitness Metal Punk Gym and Congreso building during the month of March.

The EP was recorded in June 2021 at Pablo Donoso’s studio. Pablo is the well known drummer of Pentagram Chile and Sadism, he has also worked with bands like Devil Presley, Recrucide and Audiopsicotica. The art itself was created by Alexis Ávalos, who has too worked with Devil Presley.

”We empathise and identify ourselves with the different sociocultural realities that now exist, therefore our message is loud and clear and our performance is driven by high energy on stage. We look forward to connecting with our audience and to make them a part of our journey.” The band says 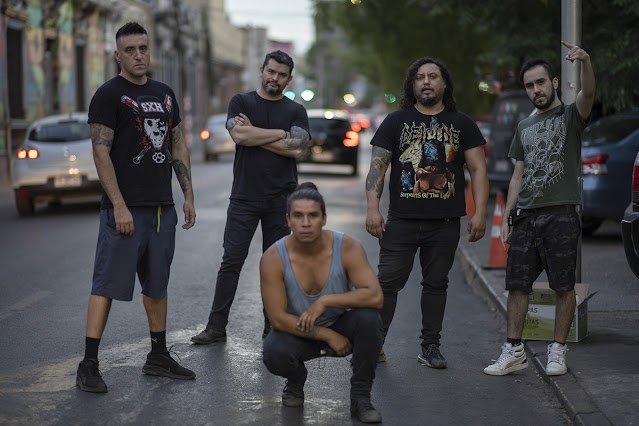 DelTerror consists of Ricardo Vasquez (Bassist), Gabriel Marquez (Drummer), Tulio Rosales (Guitarist- also in EQZ), Rodrigo Fuentes (Guitarist and vocals) and Francisco Sepúlveda (Vocalist) The band was formed in the midst of the global pandemic, thanks to Marcelo Power (‘Homicide’ drummer) They managed to produce during lockdown. The band is now getting ready to present in a series of upcoming shows starting in May 2022.