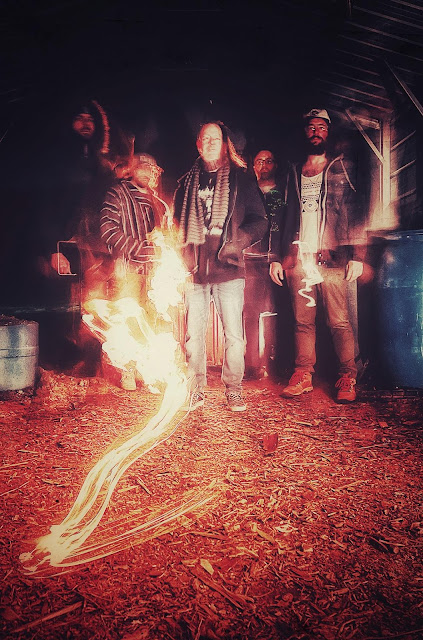 New York’s devastating crust/sludge group HUSH – formed by former members of From Ashes Rise, Self Defense Family, Aficionado, Endicott, and others – prepares to release their third full-length release, The Pornography Of Ruin. They have premiered a new single, “Above Your Head They Close Like Giant Wings”, listen below:
The Pornography Of Ruin was engineered at HUSH’s studio, HOVVL Audio Environment in Hudson, New York, by frequent collaborator Ryan Slowey, and was mastered by Jack Shirley at Atomic Garden in Oakland, California. The cover was created with photography by an urban explorer Adrian Ledezma and design by the band’s vocalist Charles Hush.
With the “Above Your Head They Close Like Giant Wings” single, vocalist Charles Cure reveals, “This is the first song we wrote for the record, back in 2016 after we had just finished recording our previous release Untitled II. This track is a behemoth that starts out with a lot of crushing heaviness and then dives deep into a well of hopelessness before finishing off with a massive end riff. It is probably the song on The Pornography Of Ruin that hews closest to previous HUSH material. The title of the song is a part of a quote from the Vladimir Nabakov novel Pale Fire, and lyrically it addresses the mutable nature of the past and future and the individual as a prisoner trapped in the present as those two forces continually press in on them. It is about accepting the reality of impermanence and the malleability of consciousness and memory.”
HUSH has booked their first live shows since 2018 in support of the LP. The day of the album’s release, the band will head out on a five-city run of East Coast shows, June 24th through 28th, alongside their friends in Cowardice. They’ve also booked their first local show in several years, in Catskill, New York July 8th. Watch for additional dates to be posted throughout the months ahead.
HUSH Live:
6/24/2022 Riffhouse Pub - Chesapeake, VA w/ Cowardice, Knoll, Redundant Protoplasm
6/25/2022 Atlas Brew Works - Washington, DC w/ Foehammer, Cowardice, Et Mors
6/26/2022 TBA
6/27/2022 Saint Vitus Bar - Brooklyn, NY w/ Pharaoh, Cowardice
6/28/2022 Middle East Upstairs - Cambridge, MA w/ Cazador, Cowardice, Head In Hand
7/08/2022 The Avalon Lounge - Catskill, NY w/ Planning For Burial, Madeline Darby
https://hushdoom.bandcamp.com