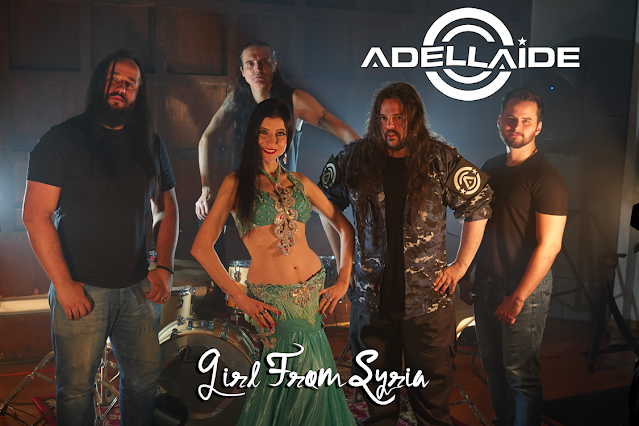 Brazilian contemporary AOR/Melodic Rock band ADELLAIDE, formed in 2016 and with strong inspirations and references from bands like Journey, Survivor, Kansas and Asia, has released a new music video "Girl From Syria", the first single taken from their third and upcoming new album "Deja Vu", which will be officially released on July 29 through Danish label Lions Pride Music.
"Girl From Syria" features the beautiful guest appearance and performance of brazilian belly dancer Cristiane Tohmé Bannout Fairuza.

Watch "Girl From Syria" Directed, recorded and produced by Rafael Agostino, below:
According to the band, the music video for "Girl From Syria" came from the idea of the song's theme that talks about Syria, valuing the importance of the country and its traditions that are spread to several countries through generations. Other themes addressed in the song are 'The Arab Spring', a well-known event in the Middle East, Saladin's Castle, an essential part of the country's history, and the popular greeting 'Ma'a Salama', which means 'go in peace'.
The lyrics of "Girl From Syria" portray the idea of the search, day and night, for a girl from Syria, lost in another country with totally different traditions from hers. This girl is played by the artist and dancer Cris Fairuza, who besides the fact that she represents her dance as a teacher of this art, presents very glamorous Arabic dance techniques throughout the video and in certain parts she walks through the streets between Arabic tourist spots in the city of Sao Paulo, such as the Antiochian Catholic Orthodox Metropolitan Cathedral, one of the sets of the video clip.
In the singer's words Daniel Vargas, "producing this video clip was wonderful! Working within the Melodic Rock musical style already puts us in a restrictive condition, because we have to work on musical elements already predictable by the public, so trying to compose a song with an Arab theme was not easy. As we couldn't work too much on the musicality, we sculpted the plot of the song based on the history of this wonderful country, which has many descendents spread around the world spreading its culture". Daniel explains about the idea of the video's plot saying that "Syria is one of the most politically unjust countries in the Middle East and is in serious danger of having its tradition fall behind with the passing of the years".
www.adellaideband.com