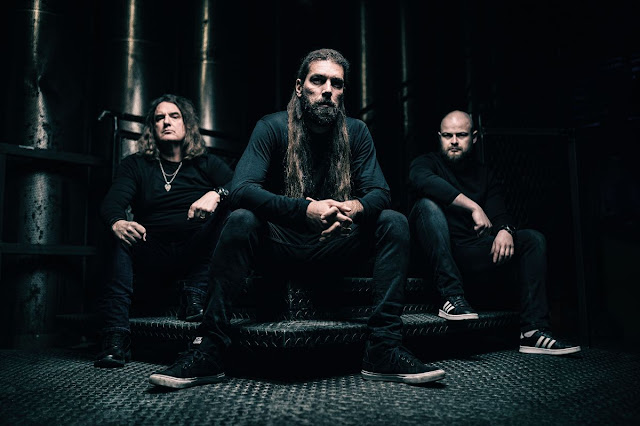 Austrian rock and metal empire Napalm Records is thrilled to announce its exciting latest signing - death thrash force DIETH - featuring the iconic line-up of Grammy Award winning bassist David Ellefson (ex-Megadeth), Swedish Grammy nominated guitarist/vocalist Guilherme Miranda (former Entombed A.D.) and drummer Michał Łysejko (ex-Decapitated).
Watch "In the Hall of the Hanging Serpents" music video here:
DIETH have pushed beyond the stereotypes of their genres to create a charismatic new sound, one rich with inventive guitar riffs, tight drum grooves, technical prowess, guttural vocals and catchy melodies. Seeking new musical projects, the band members came together in early 2022 after being introduced by mutual friends in the music industry, and immediately began sharing creative ideas - shifting things into high gear this year with the release of their debut track, "In the Hall of the Hanging Serpents", and a blistering accompanying music video.
Following its heavy acclaim and fan response, DIETH knew the only way to move was up, and now plan to drop their debut album in 2023 via new label partner Napalm Records. The album is currently in progress with producer Kristian Kohle at Kohlekeller Studio in Frankfurt, Germany, and will feature "In the Hall of the Hanging Serpents".
DIETH says about the signing:
"We are stoked to announce that we've signed a multi-album international record deal with Napalm Records, who will release our debut album in 2023. Their approach to music and devotion to metal made Napalm the perfect, most suitable place for us and our music. Last but not least, we would like to thank each one of you that are giving us this massive support. More info and details about the album will follow soon. Stay tuned!"
Sebastian Muench, A&R, Napalm Records adds:
"The term "supergroup” feels overused nowadays, but with the formation of DIETH, it correctly and justifiably describes the coming together of these three extremely talented musicians. The first single, "In the Hall of the Hanging Serpents”, underlines that the debut album could become a death-thrash metal masterpiece. Napalm Records is pleased and proud to partner with DIETH, to establish the band and make the new album a success. Personally, as a lifelong Megadeth fan, this signing is a dream come true."
Stay tuned for more DIETH news coming very soon from Napalm Records!
DIETH is:
Guilherme Miranda – Vocals/Guitar
David Ellefson - Bass
Michał Łysejko – Drums
https://diethofficial.com/